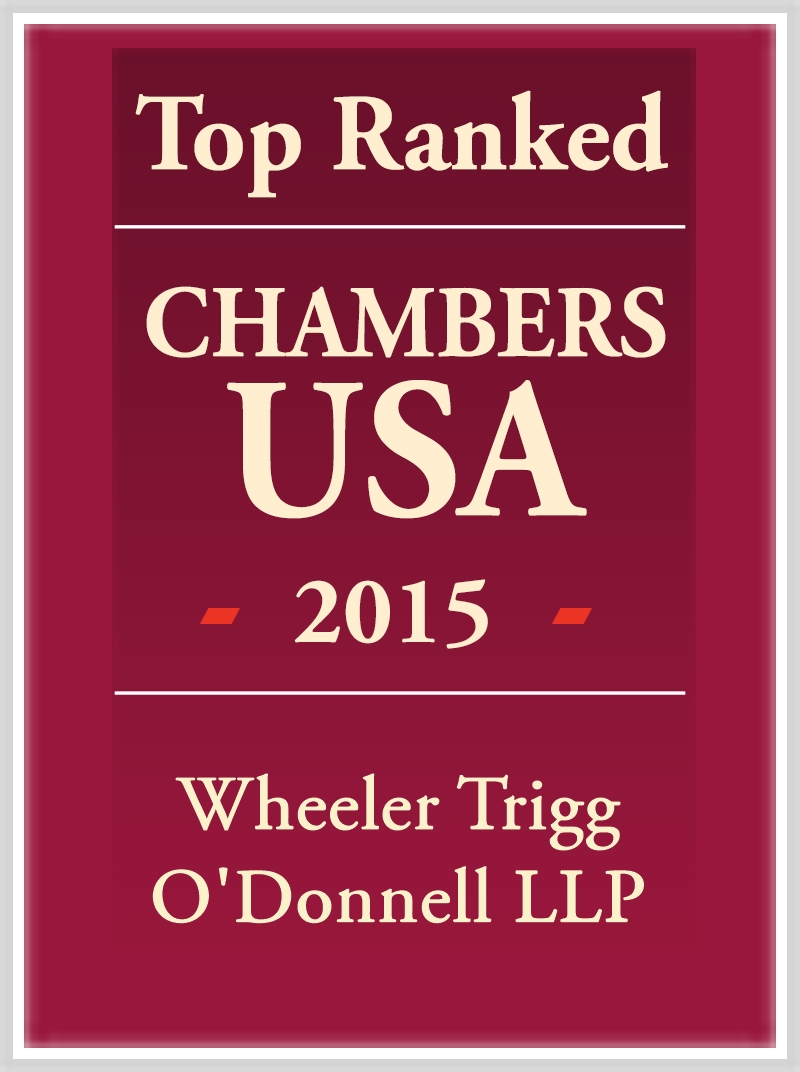 Denver: In its 2015 edition, Chambers USA has recognized Wheeler Trigg O’Donnell among the leading firms in the nation for product liability and mass torts defense. The firm is also recognized in Band 1 in Colorado for general commercial litigation, and Band 3 for labor and employment litigation.

Calling the firm a “standout trial boutique” that “houses highly experienced practitioners and an impressive new guard operating throughout the country,” Chambers ranked WTO in Band 2 nationwide for product liability and mass torts defense. Only 16 other law firms in the country earned such a high distinction.

Six WTO lawyers are ranked nationwide in product liability and mass torts, more than any other firm in the country. Noteworthy newcomers include firm chairman, Michael O’Donnell, who is recognized for his diverse national practice defending high-profile clients such as General Electric, and up-and-comer Michael Williams, who, according to Chambers USA, is “widely acknowledged for his leading role representing Whirlpool in its front-loading washing machine litigation.”

Additionally, John Fitzpatrick has been named alongside only three other lawyers in the nation for toxic tort defense nationwide (as well as in general product liability and mass torts defense). Fitzpatrick has tried over 60 asbestos cases to verdict in jurisdictions across the country, including in such plaintiff-friendly venues as Philadelphia, Pennsylvania, and Cook County, Illinois. Other WTO attorneys ranked nationally include Malcolm Wheeler, James Hooper, and Jack Trigg.

In Colorado, WTO maintains its Band 1 status for commercial litigation, and seven of the firm’s lawyers are ranked in the state. Chambers describes WTO as a “prominent litigation boutique” that “fields a strong bench of attorneys who continue to draw praise . . . for their prowess in the courtroom.” Only two other firms in the state enjoy the same Band 1 ranking. Scott Barker, Carolyn Fairless, John Fitzpatrick, Hugh Gottschalk, Michael O’Donnell, and Malcolm Wheeler are ranked in Colorado for commercial litigation. Fairless moved up from Band 4 to Band 3 thanks to client praise and her back-to-back legal malpractice wins in 2014.

Chambers has long recognized partner Raymond Martin as a Band 1 employment lawyer in Colorado and continues that tradition in 2015. In addition, the firm is ranked for the first time in the Labor & Employment category in Colorado. The publication specifically cited WTO’s “significant experience in sophisticated and high-profile state and federal employment litigation.”

Wheeler Trigg O'Donnell LLP defends some of the nation's best-known entities and professionals in civil disputes that threaten their businesses, brands, reputations, people, and relationships. In the past five years alone, WTO lawyers have tried over 45 cases to verdict nationwide. Our lawyers serve as national counsel in high-stakes trials, appeals, arbitrations, and related complex matters, including class actions, mass torts, and multidistrict litigation.